Appearance: Steely blue eyes and side-slicked chocolate-brown hair, a strong chin and a grin as white as snow - James Wilson is many things, and being conventionally handsome is among them.


Personality: A fast-talking, slick-tongued man of a magus, James - or Jimmy if you like - is more likely to be mistaken for the proprietor of a slightly dodgy used-car lot than the descendant of a well-established magical family. Charismatic and outgoing, the friendly demeanor he wears is genuine, yet simultaneously conceals a cut-throat individual dedicated to doing what it takes to achieve his desires. Though far-removed from being an 'evil' individual, James is intimately familiar with the fact that for him to win someone else must necessarily lose, and that heartache over such accomplishes little. It's nothing personal - just business. Unlike many magi he's really only interested in cutting the legs out from under a colleague or their research if absolutely necessary, an attitude many in their world would find aberrant and ironically distasteful.


Biography:
Though with distant roots in Scotland, the Wilson lineage has long resided in the north-eastern United States. Unusually for American magi their interaction with the Mage's Association remains both frequent and cordial, though neither exerts a significant influence on the other; for all intents and purposes, they could be considered an 'independent' family. The Magic Crest of the Wilson line is also somewhat unconventional in that rather than the explicit transference of Magecraft it serves as the 'key' to unlock the unique Thaumaturgical Attribute inherited down through the family over generations. The Attribute of "Division" - that is to say, capacity for the governance of the relation between objects, particularly via Magecraft - lends them interesting capabilities. While the family is unwilling to substantiate such musings for obvious reasons, the few outsiders aware of this branch of Magecraft posit that they may have been secretly but heavily involved in the success of the Manhattan Project in splitting the atom.

Ultimately there stands a long-held belief that by delving deep enough into the substance of the material world, unknown Mystery and therefore a new True Magic can be uncovered. James views the opportunity to obtain the Grail as a potential stepping-stone in this journey.

Combat Data
Combat Style: Divisive
Strengths: Taking advantage of the wide-ranging flexibility of his Division-based Magecraft, James can be a difficult opponent to decisively pin down. Additional skills in Reinforcement as well as the Elemancy of fire and flame serve to bulk up his magical capabilies in combat. And though not especially adept, he possesses enough knowledge of healing Magecraft to patch up minor injuries outside of battle.
Weaknesses: In terms of base physical prowess James is dead-average for a man of his build and stature. Opposing magi of greater strength or fighting skill will find him not much of a threat in hand-to-hand combat. Those who can counteract his Magecraft by some means will likely triumph in battle as well. And while potentially tricky to deal with, Division does not possess a strong offensive presence in a direct spellcasting battle between magi.
Last edited: May 18, 2021

Ray-Absorbing Panels: The most immediate stand-out feature of the Gairyuki are the array of lurid orange, semi-transparent panels adorning its armor. When activated these panels function as receptors, forming a field encompasing the Gairyuki that is capable of absorbing incoming energy-based attacks and instead shunting that power directly to its own systems, most notably the Ray-Absorbing Charged Particle Cannon. By redirecting captured energy to various subsystems the Gairyuki is capable of supercharging its own brute strength, top speed and acceleration, output on its beam weaponry, or sensor effectiveness, though only one such system can be boosted at a time.

Hien: Swallow-type Zoid, formed by portions of the leg armor, the backpack-mounted wing thrusters, and the armor on the tip of the tail. Beyond integrating the twin 50mm energy vulcan from the tail, Hien possesses a limited capacity to utilize the ray-absorbing panels on its wings to absorb fire, though it is unable to utilize the stored power and must simply discharge it. Maximum airspeed mach 1.5. Generally meant for scouting rather than combat duty.

Gekkou: Horseshoe-crab-type Zoid. Though ostensibly an aquatic machine, Gekkou is capable of utilizing the Gairyuki's backpack armor and thrusters forming its body to become something of a flying brick. It also mounts the four 50mm energy vulcans from said backpack. Much more heavily armored than Hien, Gekkou can battering-ram its way into enemy machines quite effectively, and its ray-absorbing ability is significantly more potent. It can also store that energy and shuttle it back to the Gairyuki if necessary. Despite being a crab, Gekkou does not actually possess any legs. Maximum airspeed 350 km/h. Detaching Gekkou has a notable impact on the Gairyuki's maximum speed.

Raiden: Warthog-type Zoid. The body of Raiden is formed not by armor, but the 4-barrel impact cannon and AZ120mm pulse laser gun, which are sheathed in part of the tail's plating. Primarily intended as a flanker support unit, the integration of the Gairyuki's larger weapons means that Raiden possesses firepower much greater than its diminutive size would suggest. Like Hien, it can absorb some degree of incoming energy fire but cannot reuse it. Maximum running speed 150km/h.

E-Shield: A forward-facing, dome-shaped energy shield. Capable of absorbing a generous level of incoming fire, the greatest weakness of the E-Shield is that it only extends to just behind the Gairyuki's legs and therefore leaves the rear of the Zoid totally exposed. The ray-absorbing panels and the E-Shield cannot operate in conjunction. 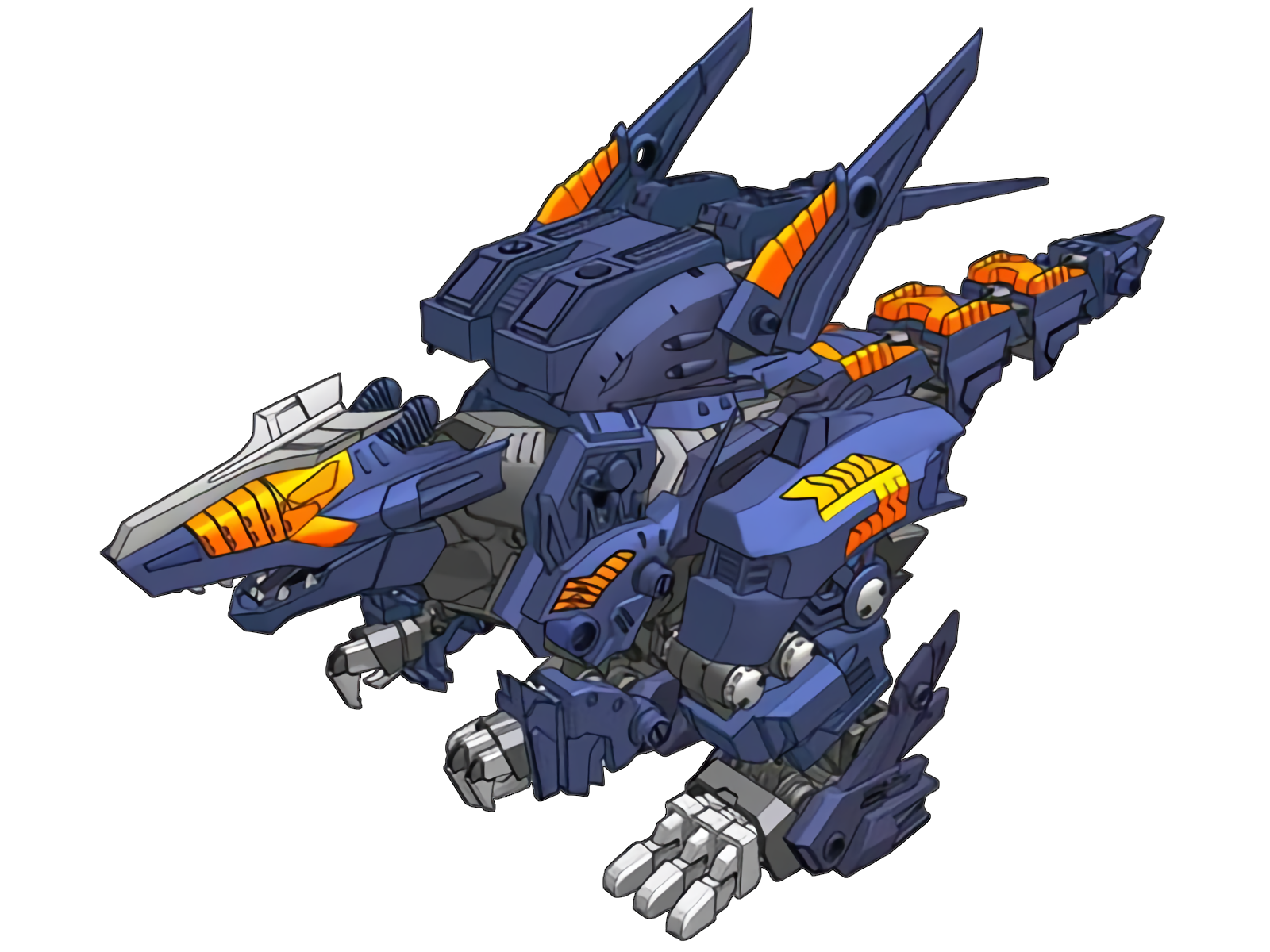 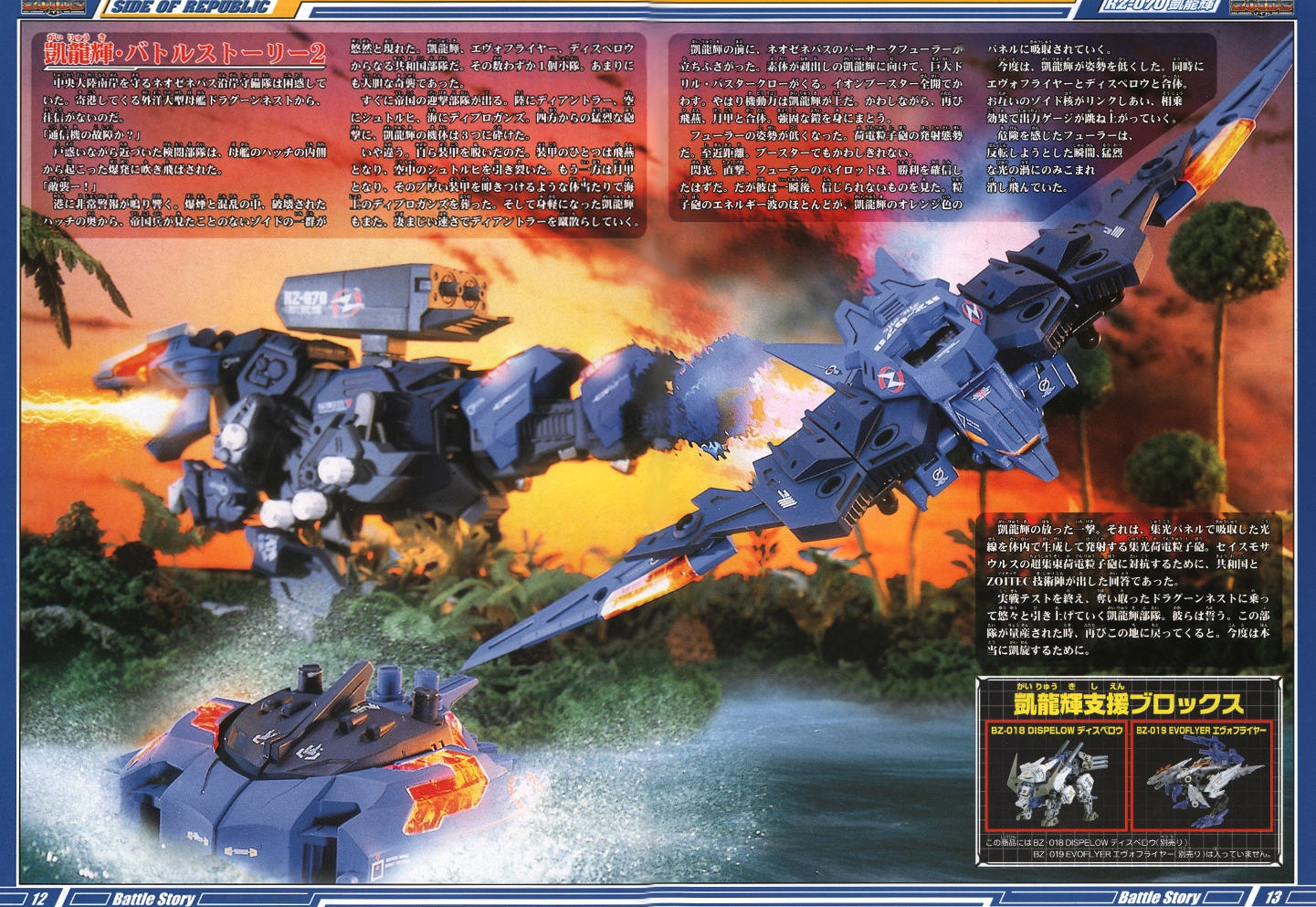 Other Information: Are they a Newtype, Whispered, Dominant or otherwise abnormal? List it here. Things like character themes, hobbies, likes/dislikes, tics, and any other relevant information can go here too.

Biography:A summary of your character's personal history, about 2-3 + paragraphs. Where are they from? How did they end up in their current state? How have their choices and decisions shaped who they are?

A two or three paragraph short history and explanation of the weapon’s origins and place in the setting. Some things consider: Where does it come from? Was it made for a specific purpose? Is it a special one-off machine, perhaps a failed prototype or a cutting edge experimental model? How did it fall into the hands of your character?

Affiliation: What faction or group are they associated with?

History:
An experimental NEXT focued on heavy utilization of advanced Kojima technology. Despite being in the Heavyweight class with thick armor supplemented by a staggering affinity for Primal Armor, the ARGYROS prototype boosters keep this machine's mobility in the realm of Middleweight NEXTs. The design's primary weakness is the ARGYROS/G's lower-than-average energy output; traded off for a high initial energy storage, the CANOPUS primary weapon must be used conservatively in drawn-out battles. It can be equipped with two specialized parts - ARGYROS/XA weapon arms and the unique LETHALDOSE back-mounted assault cannon - that increase firepower dramatically but also unleash tremendous Kojima contamnination when used.

Affiliation: What faction or group are they associated with?