Lemuria and The Subterranean World (WIP)

Organization Name: Lemuria
Type: MS Hunters
Established: 71 (Since their resurgence, original date unknown)
Base of Operations: At the heart of Eastern Ganymede’s internal sea
Other Details:

No one knows exactly when, where, and how Lemuria came to be.
Unlucky Vultures who've had encounters believe they're simply under the guise of a government, some conspirators whisper of it going even deeper, claiming it's roots reach throughout the Galilean moons, before even the Insurrection. Always there in another name, another form perhaps, but still the same Lemuria today. All agree however, whether in theory or fear, it's the only explanation for such a MS collection in Ganymede's icy folds.

Unguja Sector. To neighboring zones, bandit country. To Vultures, paradise. Being one of the first few settlements, Insurrection survivors quickly flocked to it. Anarchy was quicker. Any and all early trade routes were promptly seized, leaving remaining inhabitants with no defense against frequent Vulture raids. The many sectors circling Unguja didn't- or rather couldn't pay mind to it, as even once they amassed their own MS cache, the Vulture's outpaced them via headstart and firm control over Unguja's trade outpost. Surrounded by allies yet completely defenseless, morale had dropped almost as low as supplies, only growing lower with each successive wave. Citizens eventually came to the realization that if they wanted liberation, it would have to come from within Unguja.

Instead, it came from below.

On the verge of complete social collapse with even one more raid being a fatal blow, as soon as the familiar sight of dustclouds appeared on the horizon, Unguja threw up the towel. However, the ground still shook, with citizens realizing it wasn't from the impending horde. The land before Unguja had split open, the fissure swallowing an entire Vulture brigade as a gigantic ship emerged from it. The sudden saviors revealed themselves to be a resurfaced organization, now under the alias "Lemuria", here to take back Unguja. How would they do it? The same way they got there; Underground. Supplying areas with MS and teaching guerilla tactics, Unguja with the aid of their mysterious leaders began pushing back the Vultures, and eventually, retook the entire Sector.

No sooner than this victory however, the entire Sector seemingly vanished. From bandit country, to liberated front, to a mass of ghost towns, the sudden disappearance was jarring for the rest of Ganymede, but unbeknownst to them, the truth lied right beneath their feet. With their triumph, the Unguja sector was once again approached by Lemuria, who proposed a solution to any further Vulture problems; Mass migration to below the moon. Reluctant at first, the residents were surprised to find that many sectors in Ganymede had already descended underground with no impediment to life. In fact, underground life revealed an entirely new ecosystem/economy of MS repairing, development, research, and hunting all under the safety of Ganymede itself.

With this, Unguja began the move down under, the rest being history. However, they held many unanswered questions; Why had they been "selected" for such a movement? What was Lemuria? And the biggest question of all revolving around the project Lemuria had set them on with their integration. A construction project, kept tightly under wraps, even from those working on it. With this, one had to wonder just what was Lemuria hiding, quite literally, under the surface? These questions echoed off into the tunnels of Unguja's new found home and trusted friend, and eventually, became history.

Longtime member of the organization, Parmelius's past before joining is mostly a mystery. With a select few knowing the details, the bits known to the public are only that he's supposedly been with Lumeria before it went under the moniker. With this usually bringing up more unanswered questions than answers, most simply move past it on onto his current career. Parmelius considers himself and his team as Lemuria's "Representatives". Heading to Sectors in peril and giving them a first impression on Lumeria, something Parmelius deeply values and shines in
With such an influence on others and certain air of uncanny trustworthiness, some citizens and his own troops relate him to the elusive super newtypes. However, with this adding even more mind numbing mystery, most just brush it off.

Combat Style: Hard Counter
Strengths: Very ambitious, Parmelius holds high hopes in his subjects and, being the leader, takes it within himself to be their supportive backbone. While he has no shortage of combat ability, Parmelius mostly focuses on avoiding conflict whenever possible, being a representative first and a Hunter second, his unit allowing him to be both simultaneously.
Weaknesses: With his tendency to avoid combat and focus on diffusing conflicts, Parmelius's efforts usually only sparks more trouble.
______

Name: Solomon Bravada
Age: 32
Gender: Male
Height: 6'0"
Weight:190 lbs
Eye Color: Brown
Hair Color: Brown with grey streaks
Ethnicity: Ganymedean
Appearance:
Solomon has a wide chest area, balanced out by his tall build. His facial features are a bit rough, with dirty marks and bruises littering his grimy complexion. When in casual clothing, he goes for black, leather coat with the Lumeria insignia on the back, he also wears black gloves to match, both having the cross stitched in by crimson thread. Going down, he adorns tattered denim blue jeans, showing that they've gone through some abuse in the past, ending in studded dark boots.

A veteran of the Insurrection war, Solomon found himself settling down in Unguja only to be called right back into battle. With the war having mellowed him out, he found himself taking more of a mentor role, working alongside the Lumeria forces in teaching civilians.
Eventually, he reinstated himself full-time into active teaching, joining up with the more layed back "Representative squad" as a stern instructor

Combat Style: Coordinated
Strengths: Even though he doesn't hold any newtype abilities, being a veteran has its perks. Sheer experience and grit gets him through most missions, along with his ability to work as a secondary leader, providing more tactical orders while Parmelius offers moral support.
Weaknesses: Despite having a usually calm exterior, he isn't exempt from butting heads with Parmelius from time to time on orders. While excelling at the art of war, he mostly leaves the "diplomatic matters" to Parmelius

Name: Kaine Calvert
Age: 19
Gender: Male
Height: 5'7"
Weight: 159 lbs
Eye Color: Green
Hair Color: Ginger
Ethnicity: Ganymedean
Appearance: While still only a youth, most of his round traits are balanced out by his height. Out of combat, he adorns the standard blue Unguja parka, wearing a scarlet button up plaid shirt underneath, finishing with black jeans. He also adorns a Lumeria emblem pin on the right side of the shirt
Classification: Newtype

Being a young boy in the slums of Unguja, it's an understatement to say Lemuria impacted Kaine. Seeking to join in on the thrill of MS fights and the war stories, Kaine immediately joined into the MS hunting agency once of age and was promptly dumped onto the "Representative squad". With this, Kaine got a taste of the true nature of war; Sitting at outpost for hours, "diplomacy work", and most importantly, helping out the settlements.
Despite this turn of events, Kaine still finds himself absolutely excited in childlike innocence. To be working alongside heroes and moving up the ranks, Kaine really was living the dream

Combat Style: Blitzkrieg
Strengths: A surprisingly decent fighter, Kaine focuses on overwhelming the enemy with close range attacks and ally support
Weaknesses: Brash, defiant, and hyped up on stories, Kaine is unsurprisingly prone to poor combat choices, his upclose and personal style of fighting not mixing well with a lack of real experience. Despite being tasked with support, Kaine's center of attention attitude usually ruins formations.

While Lumeria's economy is mostly based on MS repair, and development, none of it's once civilian workers are particularly good at it. More often than not, the result is a patchwork mess of parts and other MS concepts. However, the Re-Bruckeng is an example of rare cases when the experiments go right.
Refined for MS hunting, the segmented Einerad was removed, a newly integrated sub-arm unit taking it's place. This sub-arm unit not only expands on the einerads defensive capabilities, but also mobility and versatility, making it idea for all situation; be it underwater, on land, or space. Despite all this, the true refinement in the design considering MS hunting are the tire mounted beam wire, which can be used for cutting, capturing, and in some cases, the trick rocket guided strings can be used for a quick close range distraction. When all this is coupled with the versatility and sheer mobility of the unit, the Re-Bruckeng becomes a formidable predator and a true display of Lemuria's capabilities. 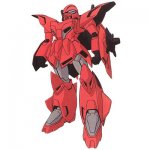 History:
During the takeback of Unguja, the Zolo played an integral role in equipping civilians. The real danger of the unit lied not in it's MS form, but the terminal system. Not only did the system's autopilot lessen the need for trained pilots, but it also increased the count of fighters in use. Through this, the Zolo was used to swarm and drive back Vultures, continuing to do so in Solomon's hands with the terminal system being used to the fullest.

History:
Making up the backbone of Lemuria's militia, the domutillia is considered the final form of beam rotor tech before the transition to einerads. The unit, built with this in mind, complimented the path paving ground units with aggressive close combat and ariel capabilities. 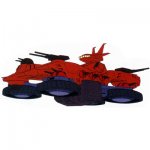 (Slight differences; The bow and main cannons respectively have been replaced by a huge drill)
History:
With the journey underground, something had to have the job of making all those tunnels. As such, Lysithea ships were selected to be heavily ovehauled, with an oversized drill being installed to do the task. Due to the neutrality of Lumeria, Lysithea's were mostly reduced to simple burrowing and transport ships, relying on their massive size, troops, and terrifying drill to make up for a lack of any actual firepower. Despite this, the Lysithea still isn't anything to be scoffed at, the ship retains most weaponry with the aforementioned drill, while taking the place of main cannons, can still be used ala ramming weapon as a last resort.
Another strength unsuspectedly lies in the ships new purpose, with the tunnel network it travels allowing it to have the element of surprise. Deployable from nearly anywhere in Ganymede, it can move under the enemy undetected and unobstructed.
Last edited: Feb 25, 2019
You must log in or register to reply here.
Share: Facebook Twitter Google+ Reddit Pinterest Tumblr WhatsApp Email Link