An item of great importance to Dimidas, a set of marriage rings meant for him and his lover named Ashley. They are simple in their design, silver rings with the word “Inseperable” written on the outside and the words “Souls” written on the inside. Due to the war, it acted more as a symbol of their love and dedication to one another, until Ashley’s sacrifice during a large scale invasion from an unknown force took her life. Now Dimidas simply wears their rings on a chain necklace, a reminder of what he has lost and what he hopes to prevent in L’ Isola when the time eventually comes.

Both equipped with an integral suppressor and under barrel laser sight. 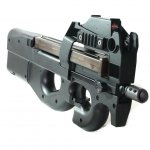 Equipped with a red dot sight.

Modified bipod to act as a forehand grip.

Comes with Infrared and Highlighting capabilities in the visor. Design is modular, allowing for the attachment of heavier armor and armaments. Visor is capable of flipping up, and can be replaced by a clear visor for piloting. Formerly the uniform of Dimidas’ Special Ops unit.
Last edited: May 12, 2021

Head Vulcans
Simple vulcan guns that rest in the head of the Wildschwein. They are meant to cause small amounts of damage to enemy mechs, destroy small projectiles, and to act as anti-personnel weaponry.

Beam Sabers
Simple weapons that can cut through many materials with a plasma blade. When not in use, they are kept in the shoulders.

Rail Cannons
Despite the name suggesting a large Railgun style weapon, this instead refers to dual revolver style railguns used by the Wildschwein as backup weapons. When not in use, they reside in the side skirt armor, ready to be drawn at a moment’s notice.

Beam Ripper
The signature weapon of the Wildschwein. A forearm mounted disk that can emit a beam ring around said disk in order to cut opponents into pieces. It can also extend said beam into a large arm mounted beam saber. This weapon is capable to remote attacks when disconnected from the forearm, cutting enemies apart as an autonomous flying discus. In its remote attack mode, the Beam Ripper is capable for forming a field that shields the Wildschwein while also enhancing any projectiles that are fired by the Wildschwein and its allies. When attached to the arm, this can also act as a beam energy shield to protect from direct projectiles. It can also form a beam whip with the segments of the disk. With the upgrades made to the Clarent, the Ripper is now capable of creating an energy net in the middle to restrict enemies by disabling electronics and restricting limb movements.

Arc Snare
A new integral weapon that makes use of twin chakram blades that channel an electrified current between each other via a cable. They can be used as a close quarters melee weapon, cutting like a buzzsaw through enemies when the blades still remain attached to the launcher. While on the launcher, they are positioned similarly to pincers of sorts. They can also be used as a ranged weapon which disables and damages enemy systems by entangling around the target and sending an electric shock to systems affected by the snare. 4 extra sets can be used to reload the snare, making there a total of 5 snares that can be used against enemies. This weapon is located on the right arm of the Wildschwein.

Heel Crusher
A collection of beam blades located at the back of the ankles. These are simple weapons for use in close quarters combat should the need arise for combat with the lower half of the body.

Photon Rifle S
In order to engage in mid-range combat and to reduce weight, the old Beam Rifle used by the Mk-II was replaced by a simple shortened Photon Rifle which fires photon beams at enemies.

Wings of the Rebellious
Two large physical weapons which can emit beam blades to increase their power. Weapons alluding to Sir Mordred of the Knights of the Round Table, these are the Mk-III’s most devastating weapons. They are dual heavy physical blades which both have cutting edges on one side, and said blades can also project a beam field around themselves for increased range and cutting power. They can also be combined to form a larger beam blade, made to cut apart enemies larger than the Wildschwein. In their single bladed mode, there are thrusters that can be used to propel the blades forward to produce more force or to speed up the swing. When not in use, they double as wing boosters on the back of the Wildschwein Clarent.

APT-Link System
The system allows the pilot to telekinetically control and enhance objects around them by using their psychokinesis. It is mainly meant as a system for Psychodrivers. It also has Psuedo capabilities, allowing people without psychic capabilities to still use the system to a limited capacity, only weakening the strength of their attacks.

Fafnir Converter
This system allows the Wildschwein to steal energy, either directly via physical contact or through melee strikes with physical blades or via unarmed combat. This system is good in long attrition fights as the Wildschwein will usually end up still having its reactor still full of energy.

Full Metal Rampage
This maneuver is an all out attack, using all the weapons possessed by the Wildschwein. It begins with the deployment of the Beam Ripper, which cuts the enemy apart before being shot repeatedly by the Rail Cannons. This is then followed up by the Beam Ripper opening up to surround the enemy with an energy net, this causes them to be stuck in place for the Wildschwein to use a combo involving the two Wings. Afterwards, the swords are thrusted together straight through the enemy. The finished touch being a point blank charged shot from the beam shot rifle to finish the enemy off.

Clarent, Sword of the Rebellious Knight (Rebellion EXceeder)
An overdrive protocol allows for the Wings of Rebellion to be used at maximum power. The combo begins with a full on charge with the Rail Cannons, shooting multiple rounds at once. Once the enemy is stunned, the Wings of Rebellion will be pulled out and used in their sword modes with enlarged energy blades, cleaving horizontally and catching the enemy in a “claw”. This is then followed by the Heel Crusher activating on the legs before performing a push kick against the enemy to create some distance. The final part of the attack then sees both Wings of Rebellion put together to create a large blade able to cut through 40+ meter tall enemies. It ends in a downward swing which then ends the combo.

Or if you want it simpler:

I am Wodan, Wodan Ymir. The Sword of Magus.
EXTEND, ZANKANTOU!

After a few battles with the denizens of L’Isola, Dimidas decided it was time for an upgrade. Designed to counter both real-type and super-type Mobile Weapons, the new and improved Wildschwein Clarent utilizes weapons for dealing with both big and small targets. It was also designed with speed in mind, meaning it has lighter armor than previously. Its frame has also been redesigned for more movement, reducing weight as well in the process.

File changes made. Save?
>Yes