We are the Mooninites, and our culture is advanced beyond all you can comprehend with 100% of your brain. 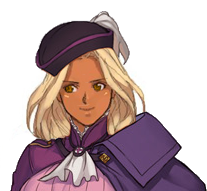 Name: Valencienne Kiraly
Age: 36
Gender: Female
Height: 6'5"
Weight: 200
Eye Color: Amber
Hair Color: Blonde
Ethnicity: Euro-mix (p. Scandinavian)
Appearance: Val is a a tawny blonde of amazonian height and leanly muscled curves. While not unusually thick for her proportions in any given area, her proportions are still of a greater scale than most lunarians around her. Her legs are long and skilled at springing, her limbs slender yet sturdy. Her hair is long, and while frequently tied back in various forms, when engaged as a knight it often flows freely behind her head. Once transformed, she gains several inches from length of her boots (and the hydraulics contained therein).

Biography: Val Kiraly stuck out like a sore thumb from the day she was born. And that's saying something for someone born on the moon, in a diverse society of eccentric psychic aristocrats! Despite the nobler airs her nation put on or the choice heritage that had spawned her, she was as wild and precocious a thing as ever set foot on the lunar surface. She was a natural born athlete. She was a restless explorer. She was an insatiable picker of scraps and skirmishes. A girl far removed from the fair and cerebral willow that was her mother.

It was natural then that she'd be shoved into squiredom as soon as possible. And just as natural that it did absolutely nothing to curtail her spunk, only give it a better outlet. As soon as she'd mastered a sword, she wanted to master a bigger sword. And then the hammer, and then the axe, the spear, the bow, her own bare hands. Each one approached with the feist and ferocity of a child at play, eager to move from one game to another. When she'd come of age and run out of toys to play with (and discard), she was palmed off up the ladder to ever more wearying posts by commanders only too happy to make her the problem of someone else. Perhaps even someone who could finally wear the dauntless dynamo down.

Eventually she found her way to the experimental Kaiser program, an effort of the superest science. Her boundless energy and irrepressible spirit made her few friends at the start, but over time her dedication has won her close comrades and selection as the CompatiKaiser's pilot. When the Kingdom is in peril, the towering knight races forth to confront its foes - with Captain Kiraly at the controls.

Combat Style: Arete
Combat Theme: Steel Reason
Strengths: In action Val transforms into the red Knight of Courage, Chevalier. Her Fighter armor is configured primarily for shock absorbancy, and to further accentuate her athleticism. In addition to the standard arms of sword and pistol, Val can summon the Kaiser Crusher, a sizable, self-propelled hammer. Her fighting style tends to be that of a bouncy flying brick - always up front, throwing herself into weighty blows or gladly recieving them, literally leaping into each encounter. She leads by example, using her carefree love of the contest inspire her fellows. Even when piloting, she continues this exhibition - bobbing and swooping and making daredevil attack runs, even though her fighter of choice is the smallest of the Compatible Kaiser components.
Weaknesses: Being a bouncing bruiser in bright red armor is the height of hubris. And as much as hubris can inspire, it can also demoralize when it's laid on its ass. She makes a spectacle of herself, and she uses her visibility to be as intimidating and inspiring as she can, but doing so also paints a neon target on herself. Craving a challenge is all well and good, but when that challenge is too great and runs right over you, what are your comrades left to do?
Last edited: Sep 11, 2018