Biography:
Johanna comes out of a family of military tradition, so it was natural for her to enlist in the Directory army as soon as she was of legal age to do so, but instead of dedication to the Directory it came out of a sense of tradition and duty, that said the world government despite its issues still has her preference over that weird honor system on the moon or whatever the colonies want.
During training she rapidly made a name for herself as the best sharpshooter in her class. Her melee combat in contrast was the worst of her class but that didn’t matter to her, she was firmly of the “No need to learn melee if I just shoot them before they get to me” philosophy, this plays a big part in her easygoing nature.
Due to this she was put in a specialized class for long-range sharpshooting, further specializing in mech piloting. Here she excelled, with all the parts of the training she failed at taken out of the equation she would graduate top of her class and be sent over to North America as the pilot of the recently finished prototype Weissritter.
The gift of the prototype reinforcing her sense of superiority and security.

Combat Style: Range
Strengths: Excellent sniping ability combined with high mobility make for a formidable hit & run mech. Combined with the presence of both energy and regular ordnance make it so that the Weissritter packs a mean punch for its size.
Weaknesses: No close combat training and lack of close combat weapons on the mech. In addition the armor is halved in contrast to a regular Gespenst and as such doesn’t provide much help against any hit. 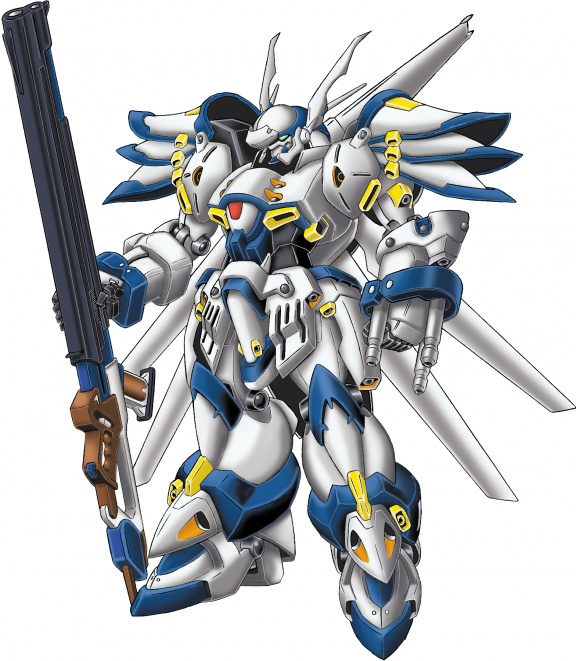 History:
Created in an attempt to mass produce a new series of Gespenst units, geared towards maneuverability and speed. Equipped with a Tesla Drive it was intended to be the Directory’s primary flight unit.
Despite success and relatively low mass production costs the project was scrapped due to both the Lion, its variants and the Huckebein MKII-M remaining cheaper to produce, way easier to maintain and not sacrificing a notable amount of armor for its mobility. Regardless the finished prototype was still shipped off to North America for combat use.
Last edited: Aug 21, 2018